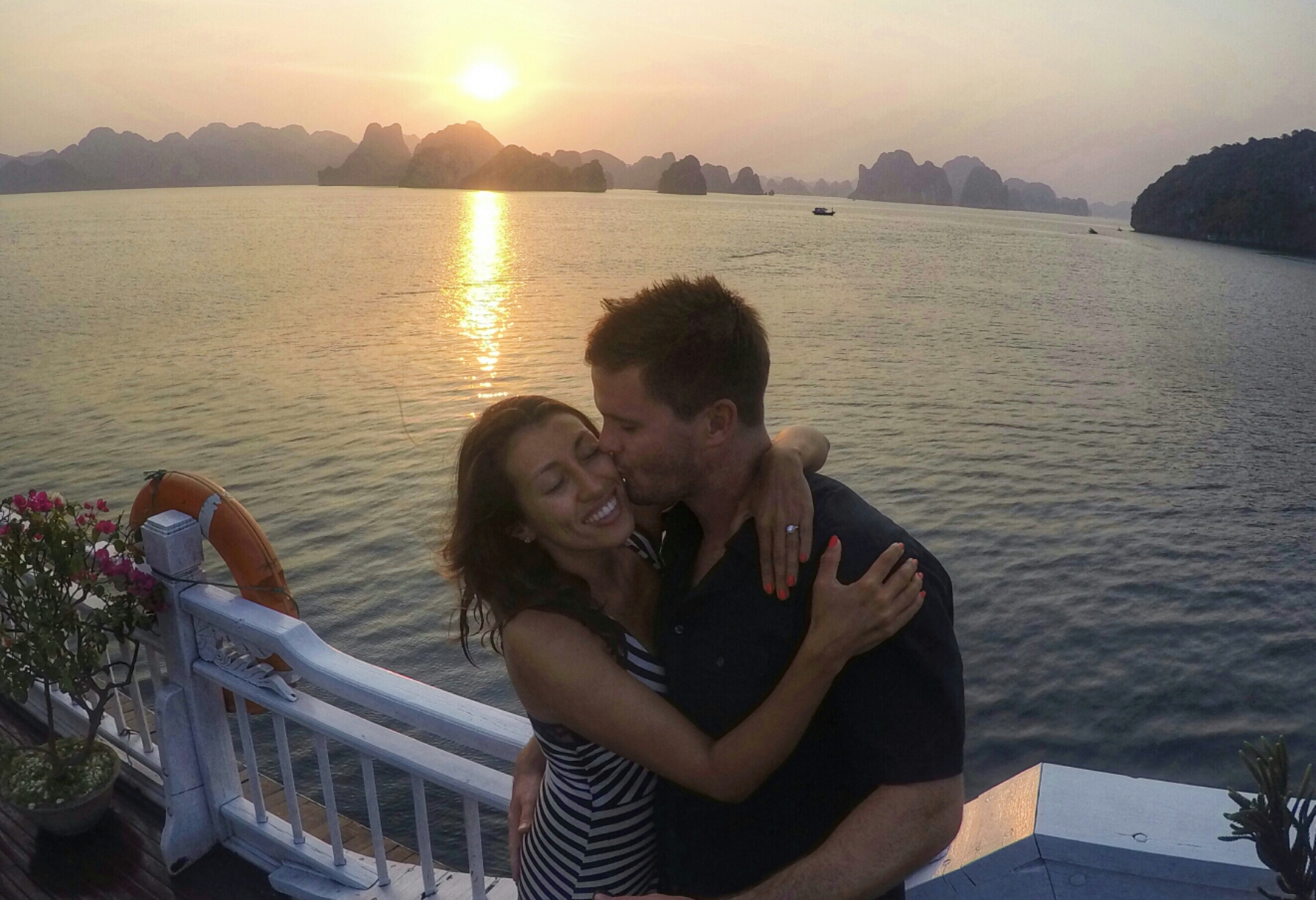 How We got There
Took a minivan from our hotel in Hanoi to the port, then jumped in the cruise. Pick up/Drop Off in Hanoi included in cruise. 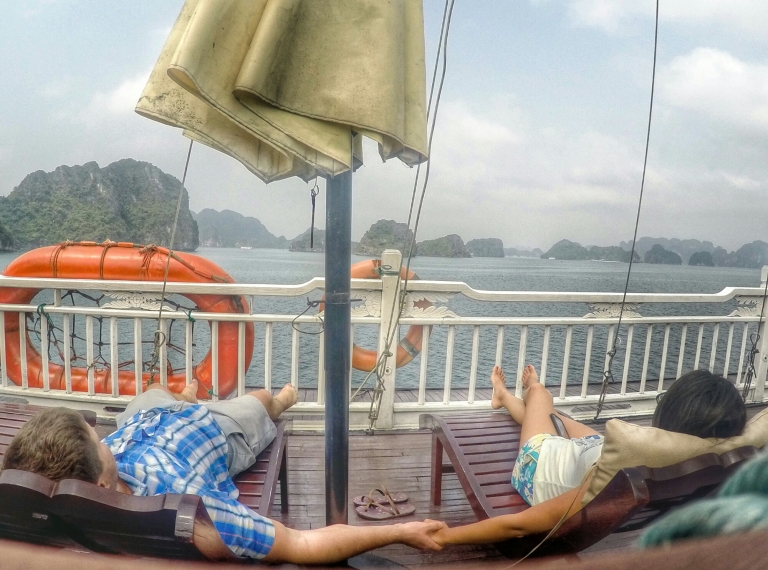 Where We Stayed
3 day 2 night cruise by A Class Opera. Accomodation in the boat. We paid 9MDong for the cruise for 2ppl.

How We Got Around
Boat, Swim and Kayak. 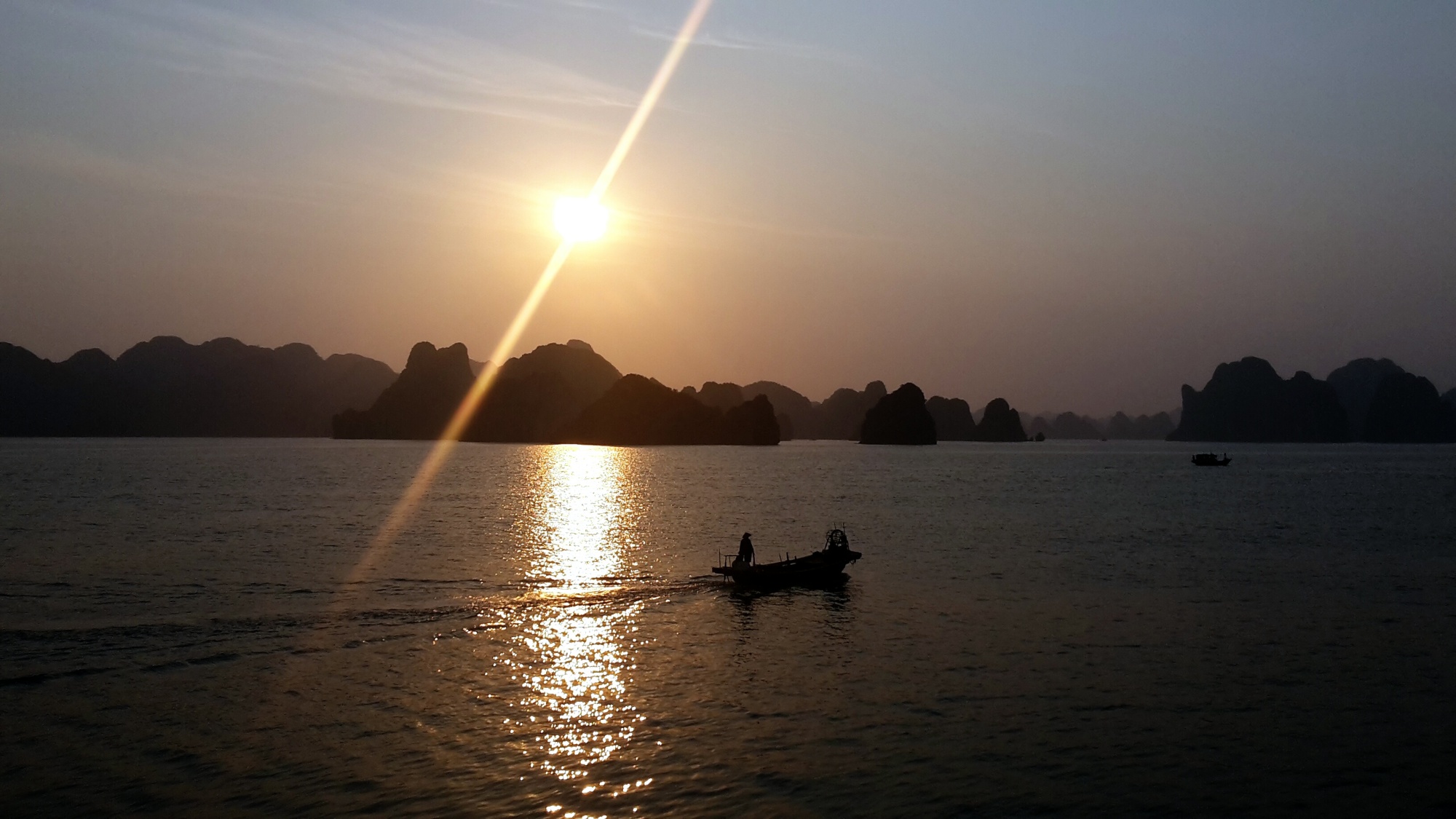 I will never forget Halong Bay, not only because of the astonishing scenery, the little mountains and limestone cliffs that pop up from the ocean every few meters, or the tranquility of cruising in quiet waters, but because in Halong Bay is where my favorite travel buddy, my partner in crime, the love of my life, asked me to marry him.

It happened during the second day of our 3 day cruise. We went on a day excursion in a separate boat. It was only us, the captain and 2 crew members in the big boat. Very private and romantic.

The first stop was a floating pearl farm. It was very intersting to find out that nowadays they farm oysters to obtain pearls. I thought divers would just hunt them in ocean but this was only common up to the beginning of the 20th century. We saw how they basically inseminate each oyster with a piece of live tissue from another oyster and a sphere made from mussel shell.

Then they put them back in the ocean for about 2 years and tadaaa! you have a pearl… or not. Only 50% of oysters survive the insemination (I’m sure there is a better term but that’s what it looked like) and from those, only 20% actually have pearls that are marketable, the imperfect ones are used mainly for cosmetic purposes.

We went to the top deck of the boat to enjoy the scenery and lay on the lounge chairs. 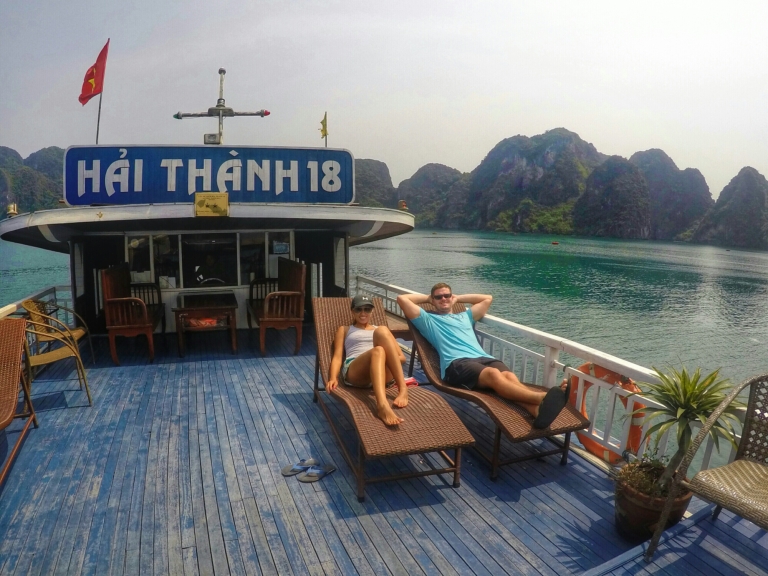 Blaise set up the go pro so we could take a picture with the amazing background we were passing and right after we posed for the picture he told me he loved me more than anything in the world, I just kissed him and said me too as I usually do when he says this. But then to my surprise he kneeled down, said he wanted to spend the rest of his life with me and asked me to marry him.

I said yes, kissed him and asked him if he was serious. I knew he was of course serious, it was a silly question, but It all felt a bit surreal, and I was a bit shocked, and didn’t know what to say. He caught me by surprise because we were doing everything as we planned it together and it wasn’t something elaborated that would give him away, plus I was already convinced he was going to wait until we were back in the States.
I couldn’t stop kissing him and smiling.

I’ve had the same grin on my face ever since.

We spent the rest of the day kayaking through caves and around islands, jumping from the boat and having great food and drinks. 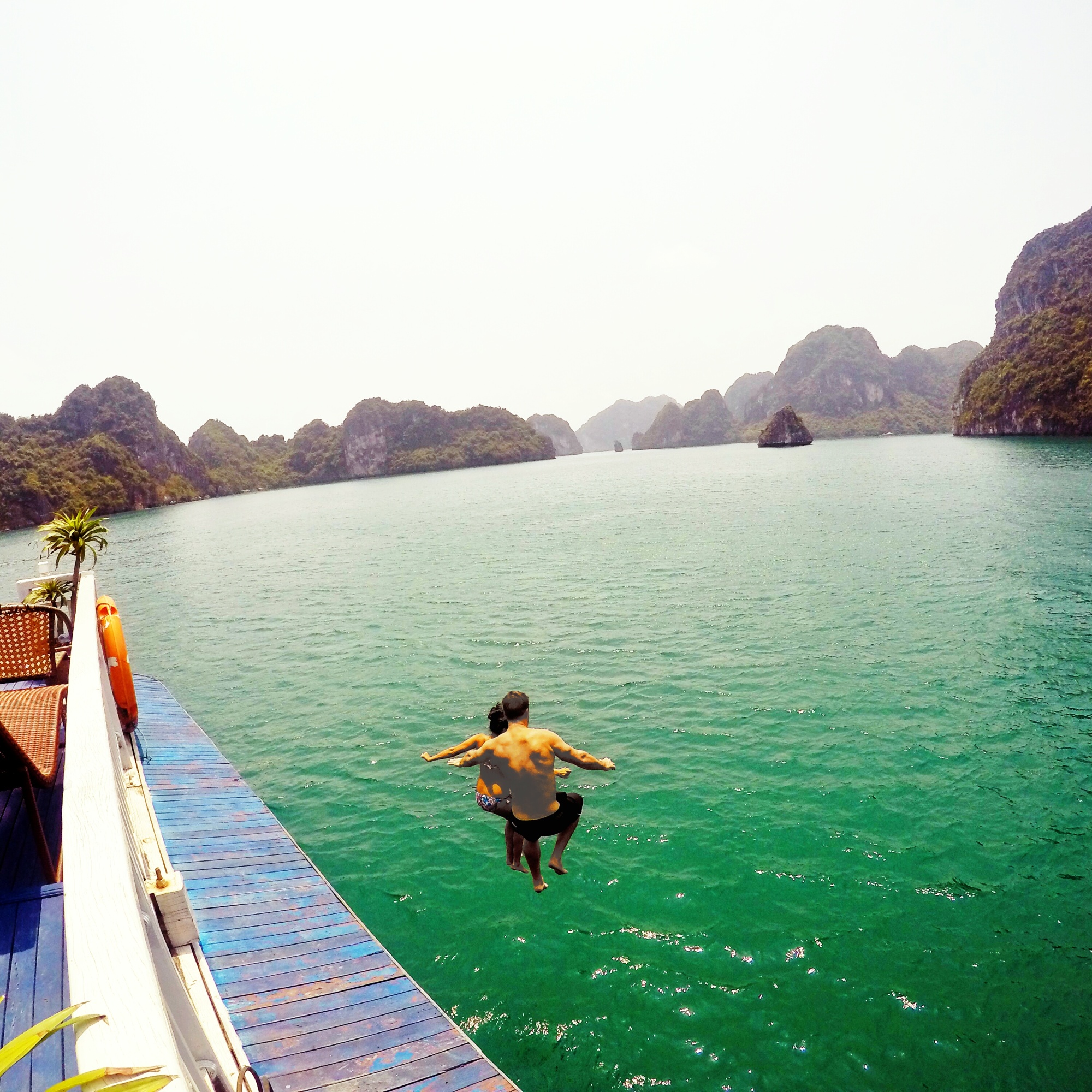 The first and last days were pretty awesome as well.

When we first got to the cruise, we were greeted with a cold towel and a drink. After having a very substantial and tasty 7 course lunch we arrived at a local floating fishing village to experience a bit of their culture. 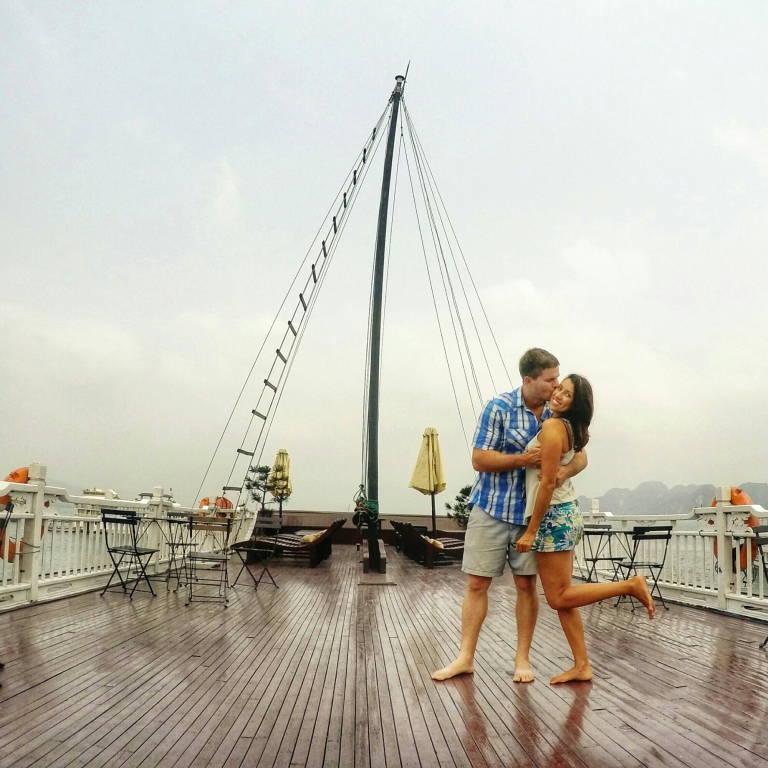 Most fisherman now have to live in mainland, however they prefer the floating villages because the commute to mainland by slow boat takes over 1.5 hours each way and by fast boat is very expensive.

The villagers took us around on a small rowing boat for about 20 mins.

Later we went to a small beach in one of the islands.

Some of the water near the shore was pink. At first, when I only saw a bit in a corner I thought it was some sort of weird chemical or contaminant but turns out it is a microbe found in the area, we saw this again while kayaking.

We hiked a small mountain in the island and had a fantastic view of Halong Bay.

At sunset, the cruise had set up a little party at the top deck with music, wine and fruits. 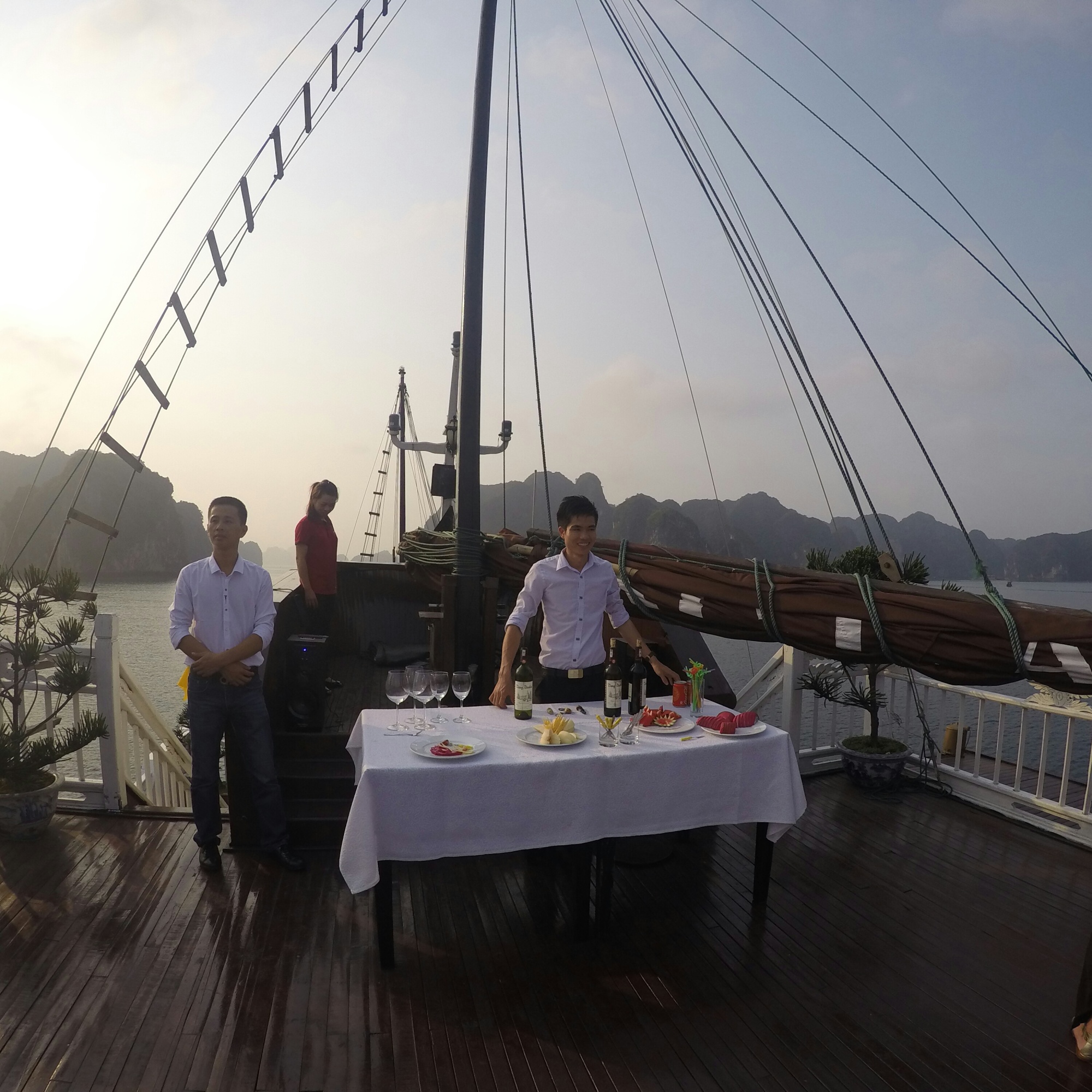 At night we did some squid fishing from the back of the boat.

The last day of the cruise, we explored the massive “Surprising Cave”. It had three different chambers and was very well lit.

It’s probably one of my favorite caves from the 5 or so we visited in the past year.

After a quick spring roll making session and an early lunch, we headed back to Hanoi.

And our Engagement cruise came to an end… 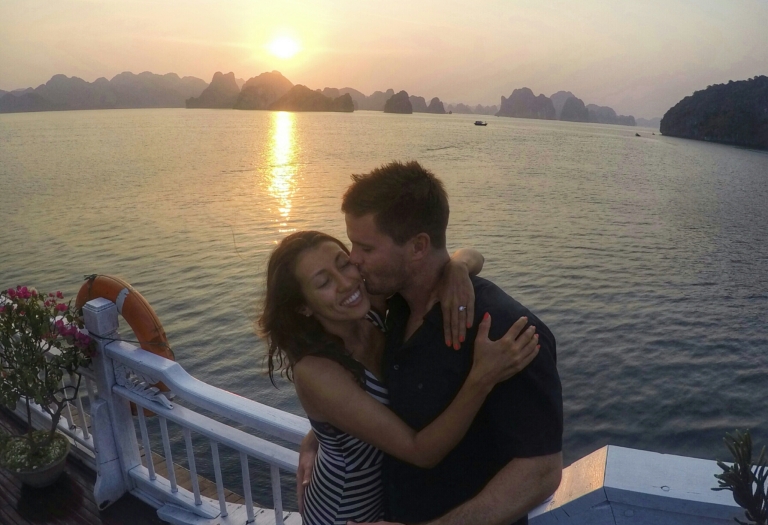