It was more than 2 years ago when I quit my comfortable and at times stressful and boring corporate America job to embark on a more fun travelling adventure.
Soon after, I wrote the post below in hopes of starting a blog to record and share my travels, like I did when I lived in China (LinaEnChina), but this time it clearly failed because that blog never started and it was the 1st and last post I created, until now.
——–
And so the adventure begins…
Couldn’t feel more loved and grateful for all my family and friends that made my last month living in South Florida unforgettable!
Several farewell get togethers, Orlando trips, and an incredible surprise party by my awesome sister!!

I officially moved to New York City on Sat Sep 22, and was welcomed by friends with a rooftop party that lasted ’til 5am!..

We started the next day with brunch, then, I was fortunate to finally meet my nephew from my extended family up in Connecticut at his 1st birthday party.
Had no trouble getting up there… Took a direct train from grand central to Darien in Connecticut and on the way back did Darien to Grand Central to Bus Terminal to shuttle to union city, NJ! 😉 piece of cake! 3 states in one day… lovely 🙂
Next 2 days was a combination of sleeping in, running at Prospect Park in Brooklyn, and unsuccessful apartment hunting.
Today, Wed Sep 26, 2012 is my official first day at Tough Mudder- started at 4:45am with a 7am flight to
San Francisco to attend the NorCal event this weekend!! Can’t wait 🙂
——-
I have many memories, stories, recommendations, and trip reports to share from the last two and a half years, so it is time I finally catch up.

I met cowboys in Beatty, Nevada who faked duels to entertain people at the local pub; farmers who took us on airboat rides in Florida; creepy wealthy men who flirted shamelessly and talked too much about politics in South Carolina; environmentalists in Tahoe, California; ski bums in Vermont; prison guards in Mansfield, Ohio; off-road park owners in Kentucky; government officials in Caloundra, Australia; farmers who took us tubing on a river in Minnesconsin (yes a newly created State); and countless others.

I also got Tougher by attending a few events;

Dressed up on occasion;

And enjoyed working with wonderful people while having a blast.

The whole time maintaining a long distance relationship with Blaise who was working in the middle east, and nourishing it through daily FaceTime dates and quarterly encounters in different parts of the world.

That year, Blaise and I met up in Switzerland to ski the Alps, where we got stuck in the Italian side of the mountain and had to spend a night with nothing more than our snowboarding gear and wallets;

in Colombia to celebrate a week long wedding, play some tejo, and drink guaro; 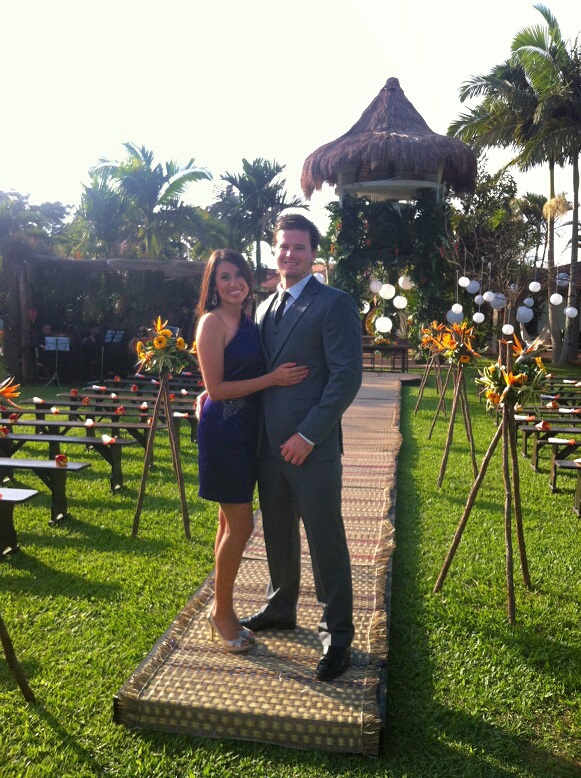 in Australia to see the opera house; in Qatar to get a taste of his life for the last year and in Seychelles to hunt for his pirate ancestors and swim in the Indian Ocean.

Fast forward 18 months and I quit that job in order to explore Australia with Blaise, because you just can’t take enough days off from work to do it, and we were also ready to be in the same continent together.

Starting May 2014 we lived in Melbourne, Australia, the city of laneways, trams and a million bars. Melbourne was our base while we did some work for Tough Mudder. From there, we traveled to Perth, Margaret River, Tasmania, New Zealand, Sunshine Coast, Adelaide, and Sydney. We also explored many small towns and rural areas while working, had lots of tooheys, brekkies, pet wild kangaroos, saw Tasmanian devils and had many adventures that I will share later.

At the end of that year, we bought a car, the Aussie Green Machine, moved out and started full time travel with a month-long roadtrip from Melbourne to Cairns along the east coast of Australia.

The roadtrip was fantastic as I spent a lot of quality time with my family who came to visit.

After selling our car (for a profit…more on that later), a quick flight and a 3 day trip to Darwin were our last Australian experiences and our gateway to a 3 month journey in Southeast Asia.

And here we are, on day 27 of our journey, waiting on our overnight train to Bangkok.

2 thoughts on “That Time I Quit My Job”